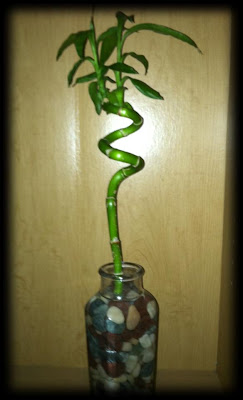 I met a new friend on our trip to Ohio. His name was Seth. He is the first green-colored Seth I've ever known! He is Seth, the bamboo plant pet.
Rachael brought him with her to Ohio because she felt that Katie would love him as much as she (Rache) does. However, I guess Katie was in no frame of mind to pay any attention to a stranger. BUT, he had a wonderful ride from Utah to Ohio!
Seth lives in a glass house filled with rocks and water...no dirt! (The lack of dirt was the first attraction for me.) I looked at him (and at his Rachael) with more than a little dubious-ness when I would catch her talking to him in the back seat.

I have talked to plants before, and I absolutely know that they react to that, but I thought it was just the warm air from my breath that inspired them to continue to grow beautiful leaves! I have failed to talk to them with such passion, though, and I guess that was the reason I did not previously experience the communication that was revealed to me during our trip!
The second day out, Rachael went to sleep on the seat, thereby denying Seth any ability to observe the outside world. His new station became the floor of the back seat....not a happy place. I looked at him, and he was CRYING! Well, at least he must have been crying because his leaves were wrinkled from what I assumed to be the dampness from wiping the tears. I immediately took him up with Gpa (Dad) and I, setting him in the drink holder between us, where he could feel the sun and witness the beautiful tree tops beside the road.
The only words I spoke to him were, "There, that's better." But they must have been very much appreciated, because without further communication, it only took about 10 minutes for his leaves to smooth out, brighten up and he honestly seemed to be smiling!! The really amazing thing was that he was reaching those uplifted leaves toward his hero.............ME! It was evident that he was reaching for me, but still, I thought, it COULD just be my imagination, couldn't it? So, I turned him 180 degrees to check it out.
Ten more minutes passed before I checked on him again. Once again, he was definitely reaching toward ME! It was incredible!
Later, when Seth was back in his rightful position with Rachael, she also turned him around a few times, and every single time, he would end up reaching for her in a few minutes! So I am now a true believer!
The second motel-stay night, I am not sure what happened, but I think he was in too dark a place. Yes, I realize that other bamboo people grow in dim and damp surroundings, but Seth is not a conformer. He either didn't like the dim light, or else he was too cold, because the next morning when we realized his discomfort by his drooping arms (some people call them leaves all the time), we placed him in the window to bask in the sunshine while we hurried and got ready for the day. We didn't notice how long it took before his arms were stretched up and outward in a joyous and graceful, grateful form! But when we did notice, there was absolutely no doubt....he was happily shouting "Good Morning!" in his bamboo language!
I was supposed to bring him home with us, but I forgot. He may never speak to me again.
-- G'ma

Rachael's Point of View: "I sleepily start to awaken from my nap in the back seat of my parents car on the long drive to Cincinnati. Stirring, I slowly remember where and why I am and soon I remember Seth my bamboo plant, but I realize he's GONZO! So I sit up and see THIS VERY SIGHT: 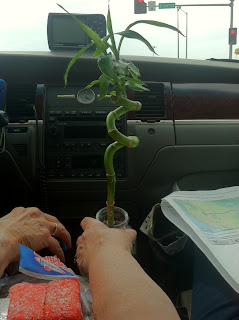